Tournament favourites Brazil were knocked out of the World Cup on penalties as Croatia kept their nerve to edge through to the semi-finals.

Croatia, beaten finalists four years ago, scored with all four of their spot-kicks as Rodrygo - taking his team's first kick - was denied by the brilliant Dominik Livakovic and Marquinhos' crucial fourth effort struck the post.

As the ball hit the foot of the woodwork and bounced away, Croatia's team sprinted to celebrate with their goalkeeper, while the Brazil players hit the turf, knowing their dream of a sixth crown had come to an end.

After an engrossing 90 minutes, Tite's men thought they had won it in extra time when Neymar scored a thumping effort to equal Brazil's 'official' men's goalscoring record.

But substitute Bruno Petkovic had other ideas, stroking in a 117th-minute equaliser with Croatia's first shot on target in the match to take the game to the nerve-shredding shootout.

And it was the European side who emerged victorious once more, having done so by the same method against Japan in the last 16, to set up a semi-final meeting with the Netherlands or Argentina on Tuesday. 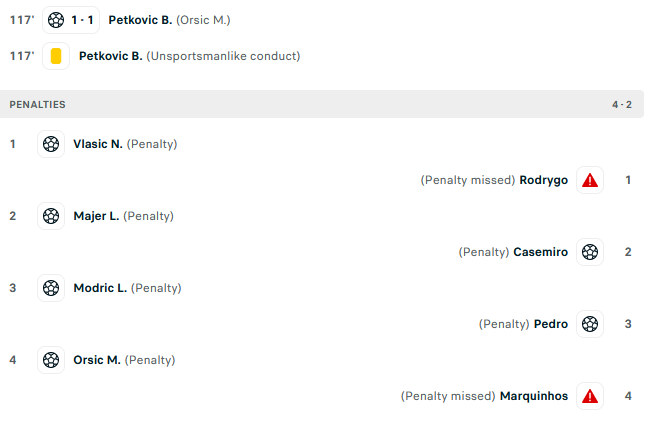