Carlos Soler scored three penalties as Valencia thrashed Real Madrid in an extraordinary La Liga match on Sunday.Karim Benzema put visitors Real ahead from long range before Soler equalised from a penalty that was retaken following an encroachment.

Raphael Varane's own goal made it 2-1 and Soler increased the lead from the spot after Marcelo fouled Maxi Gomez.Valencia were awarded another spot-kick when Sergio Ramos handled, Soler completing his hat-trick.

Reigning champions Real were looking to move one point behind Spanish top-flight leaders Real Sociedad before the international break.But Zinedine Zidane's side remain four points off the summit after this heavy defeat, although they do have a game in hand.

To add to their problems, Benzema failed to finish the game after going off injured.There was no sign of what was to follow when the France forward put the visitors ahead with a scorching strike from outside the area.Valencia levelled through a twice-taken penalty, which had been awarded after Lucas Vazquez handled.

Soler had his spot-kick saved by Thibaut Courtois and hit the post with the rebound. Team-mate Yunus Musah then poked the loose ball home, only for the goal to be ruled out after a video assistant referee (VAR) review showed him encroaching in the area.

A retake was ordered and Soler made it 1-1.The hosts, who only had one attempt on target in the first half, took the lead before the break through a bizarre own goal by Varane, who sent the ball over his head and over the line - the goal awarded several minutes later following another VAR review.In an astonishing match, Valencia went on to score from two more penalties - 23-year-old Soler becoming only the third player in La Liga history to score three spot-kicks in a game.

Valencia dropped two points (and conceded twice) beyond the 85th minute of their last league outing despite leading 1-0 by the 80th minute. This potential to collapse is further underlined by the fact that they have conceded an average of 1.0 goals beyond the hour mark across their last five home league games to be drawn/lost.

Victorious in 63.16% of their LL away games entered as favourites since the start of 2019/20, Real are yet to lose an away league game since the end of LL’s COVID-enforced hiatus (W7, D2), keeping a second-half clean sheet in five of the seven victories. Four of the wins also saw Real score a penalty goal.

Players to watch: Including his opener in last season’s league H2H here (D 1-1), Valencia’s Carlos Soler has seen four of his five prior LL home goals come beyond the 76th minute.

Real striker Karim Benzema scored the equaliser in question, and has five previous LL away goals vs Valencia (W2, D2, L1) - the last two of which have arrived deep into second-half stoppage-time! 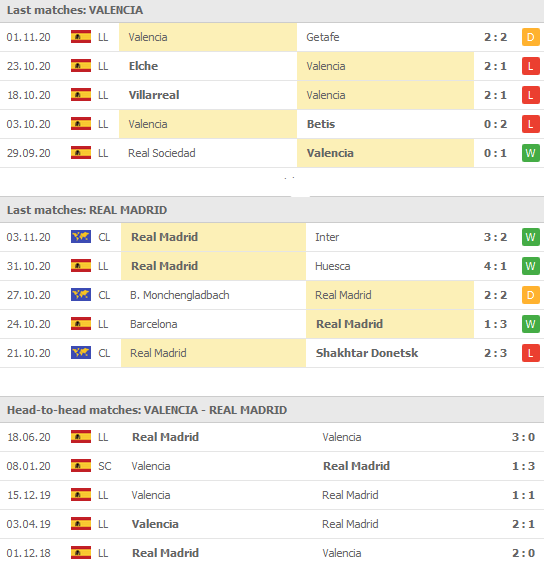