Ollie Watkins said it was "unbelievable" to score against the team he supports as his double helped Aston Villa claim an impressive victory at Arsenal to move up to sixth in the Premier League.

The visitors took the lead midway through the first half when Bukayo Saka turned Matt Targett's cross into his own net.Watkins, who scored a hat-trick in a 7-2 win against champions Liverpool earlier this season, made it 2-0 with a header towards the end of the second half and scored his second soon after, slotting the ball under Bernd Leno after a quick break."As an Arsenal fan to score here at the Emirates is unbelievable," Watkins told BBC Radio 5 live.

The 24-year-old, who has now scored six goals this season, added: "I think I have another level."In the second half you saw what I'm about, getting the ball, setting and spinning and making defenders run towards their own goal - hopefully the more I can do that the more goals I can score.

"The Gunners had gone into this game looking to build on their impressive 1-0 win against Manchester United last time out, but despite dominating possession they created very little, with Alexandre Lacazette going closest when he headed over Kieran Tierney's cross.Instead, it was Villa who always looked the most likely to score and they could have won by an even bigger margin. 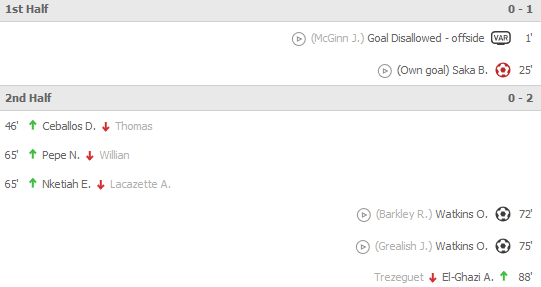 A 4-1 victory over Molde in midweek gave Arsenal a third consecutive win in all competitions, and means the ‘Gunners’ have now won 15 of their 21 UEFA Europa League (UEL) group stage games since 2017/18 (D4, L2) - six more than any other team during that period. Although a level HT score in that match also made it four first-half draws from their last five games in all competitions.

Possessing the Premier League’s (PL) best defence, four wins from five competitive home matches this season, and three straight PL home H2H victories, has Arsenal entering this game as comfortable favourites. Still, they have netted a first-half opener just twice at home this season, but have made up for their slow starts with strong second-half showings that have included an average of 1.2 goals scored per match after the 60th minute.

After beginning the league season with four consecutive wins – the first time they’ve done that since 1930/31 - Aston Villa have followed it up with two defeats in a row in which they conceded 3+ goals. Those results did, however, continue a trend that has seen Villa’s last eight matches won by the team that scored first.

Whilst outsiders here, Villa have managed to register a clean sheet in both PL away games this season (W2), something they failed to do in any of their top-flight away fixtures last term. In fact, they’ve conceded just one goal before HT across their last eight road trips in all competitions.

Players to watch: After another good showing in midweek, Arsenal’s Bukayo Saka has now registered 14 assists in all competitions since the start of last term - no teenager at a PL club has more.

Ollie Watkins scored a hat-trick against Liverpool earlier in the season, and netted in Villa’s last match too.

Hot stat: Only one of the last 14 top-flight H2Hs was goalless at HT.