Liverpool's hopes of returning to the Premier League summit were frustrated as they fought out a high-quality draw at Manchester City, who paid a heavy price for Kevin de Bruyne's missed penalty.

Liverpool, who knew victory would see them leapfrog Leicester City and Tottenham, reaped an early reward when Salah put them ahead from the spot in the 13th minute after Kyle Walker brought down Mane - but City levelled just after the half-hour when Gabriel Jesus turned superbly before slotting past Alisson.

Pep Guardiola's side wasted a golden chance to go ahead before half-time when De Bruyne rolled his penalty wide after handball had been awarded against Joe Gomez following a lengthy video assistant referee (VAR) deliberation.Both sides pushed for the winner but it was City who grew stronger as the game went on, Jesus sending a glorious headed chance wide to leave both sides having to settle for a point.

Manchester City have responded in style with an eight-game unbeaten run (W6, D2) following their record-breaking heavy beating by Leicester, most recently securing three consecutive wins ‘to nil’. They’ve shut out Liverpool in two of the last three Premier League (PL) home H2Hs too, winning all three and scoring 2.0 goals on average across the first half in those.

In the league, City trail Liverpool by five points going into this match (W3, D2, L1) but have a game in hand and will move close with a win here. Uncharacteristically, City have scored just 1.5 goals on average across their league matches so far, and netted precisely one in their previous three. However, the last six PL H2Hs have featured 3.83 total goals on average.

Aside from the Aston Villa incident earlier this season (2-7), Liverpool's two heaviest PL defeats under Jürgen Klopp have both been at the Etihad (4-0 and 5-0). However, they’ve defied the doubters by winning all five competitive matches since the season-ending injury to Virgil van Dijk, but regardless, they still enter this match on the back of 2.14 conceded goals per league fixture.

After beating Arsenal 3-1 earlier in the season, Klopp has now guided Liverpool through 50 matches against the vaunted “Top Six” sides, coming out the other end with 24 wins and just eight defeats (D18) - in comparison, City have 17 defeats from 49 in the same period.

Players to watch: Raheem Sterling (MCI) found the net in the previous H2H - his only strike in nine meetings with his former club.Hat-trick hero in midweek, Diogo Jota, has now scored in four straight competitive matches for Liverpool.

Hot stat: Man City have not witnessed a goalless first half in 17 straight PL matches - the last four saw one first-half strike. 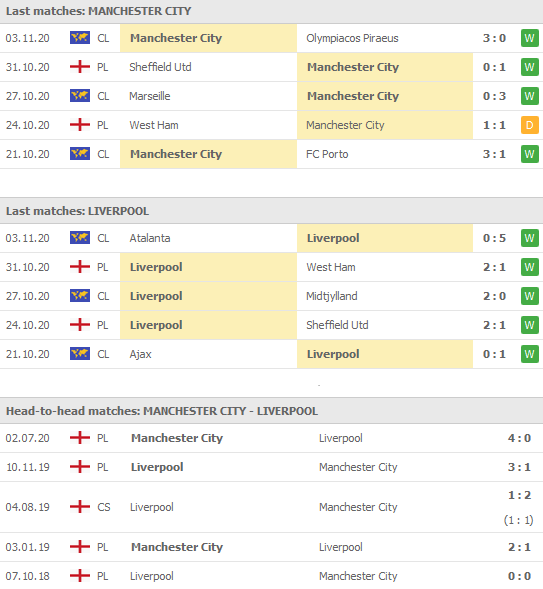