Leicester City went top of the Premier League, if only for a few hours, after a highly contentious penalty by Jamie Vardy was enough to beat Wolves at King Power Stadium.

Vardy took his tally for the season to nine goals after sending Rui Patricio the wrong way, with Wolves' players incensed the spot-kick was given after Max Kilman handled Dennis Praet's cross.Wolves claimed Kilman had no time to move his hand out of the way but referee Anthony Taylor pointed to the spot after consulting the pitchside monitor.

Portugal keeper Patricio saved a second Vardy penalty with his leg before half-time - Leicester's eighth Premier League spot-kick of the season - after Rayan Ait-Nouri brought down James Justin.Wolves threatened an equaliser after half-time, 19-year-old Wesley Fofana producing an excellent challenge to deny Pedro Neto a certain goal, Kilman fired over from close range, while Kasper Schmeichel made an outstanding flying save to keep out Ruben Neves.Leicester replace Tottenham, who beat West Brom earlier in the day to go top, at the summit, two points ahead of Liverpool who are playing Manchester City at 16:30 GMT. 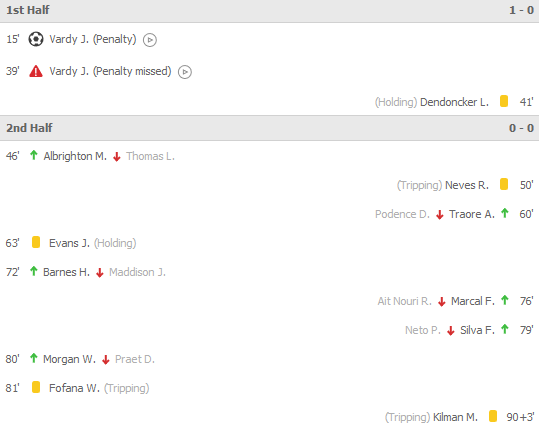 Leicester City’s 4-0 demolition of Braga (November 5) was their fifth consecutive competitive victory and extended their run of matches without drawing to 15 (W9, L6). Often striking late, 13 (76.47%) of their 17 Premier League (PL) goals came after the break this term, and seven (53.85%) of those arrived after the 75th minute - both league-highs ahead of this round, and in part responsible for their joint best-ever seven-game start to a PL season.

Another area in which they excel is their league-high (prior to the round) average of 7.67 corners per home game this term. However, they’ve conceded first in all three home PL fixtures this season (W1, L2) and another defeat here would see the ‘Foxes’ lose 3+ straight home league matches for the first time since February 2019 (L4).

Wolverhampton Wanderers, meanwhile, are unbeaten in four PL games (W3, D1) and no team has kept more league clean sheets than them (four) this term after they beat Crystal Palace 2-0 (October 30). Scoring first in five of their seven PL fixtures this season has yielded a record of: W4, D1.

Goal-shy on the road this league campaign (W2, L1), they’ve only netted thrice, with two of those goals coming inside the opening 15 minutes. Notably, they’ve never scored in a PL game here (D2, L1) and only one of the last eight league H2Hs anywhere was decided by more than a one-goal margin (Wolves: W2, D4, L2).

Players to watch: Youri Tielemans has netted three PL goals and received three yellow cards this term while Leicester have won all ten competitive games in which he scored.

Hot stat: Ahead of the round, Leicester had received an average of 2.43 yellow cards per PL (league-high) match versus Wolves’ 0.57 (league-low). 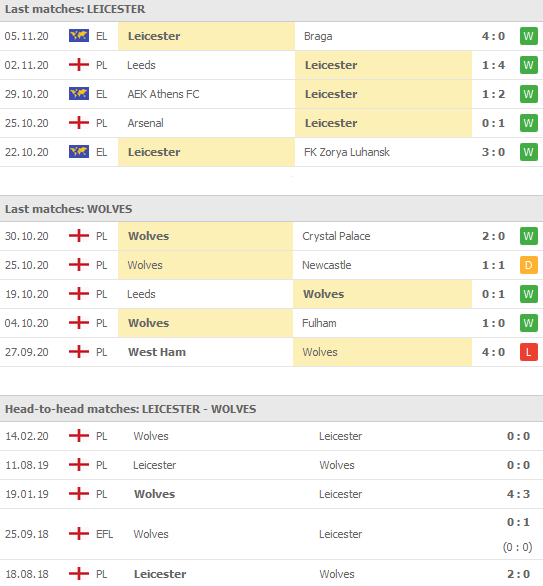 Links are split into two main blocks:
1:Streams directly viewable in browser - in order to watch the stream you can use any browser that supports Adobe Flash.
2:Streams viewable using external software - in order to open these streams you have to install an additional freeware (download links are displayed below).
Some software that you will need to install in order to watch some streams is Acestream, SopCast and others. Here you will find the full manual for the program and download links. For
1: Acestream
2:Sop Cast