A game of few chances seemed destined to end goalless after Hugo Lloris had kept out Karlan Grant's second-half header and a flurry of Tottenham chances had come and gone without reward.But, as has been the case so often in the past, Kane punished a minor lack of concentration to head home an 88th-minute winner.

Mourinho said: "This guy does much more than scoring goals. For example, last five minutes he was playing as a number six and winning balls in front of the defence. Special."He added: "Harry Kane you have to say has this many goals, this many assists, this number of balls recovered, this number of duels won.

This number of balls that he saved his team in defensive set-pieces. This is Harry Kane. It's goals plus this and this and this and that."The England captain's latest feat comes only days after he scored his 200th goal for the club. Midfielder Eric Dier paid tribute to his team-mate's latest "fantastic record".He said: "He broke one in midweek and now he has another one.

It won't affect him too much, he will want another 150."The decisive moment arrived when West Brom's defence failed to track Kane's run into the box, allowing him to leap unchecked to meet Matt Doherty's cross and guide the ball over goalkeeper Sam Johnstone.

For West Brom, who have now scored once in their last five games, it was a result that keeps them in the relegation zone and already facing a tough battle to retain their top-flight status.

Struggling West Bromwich Albion (D3, L4) have made their worst start to a league campaign since 1985/86, when they were relegated in last place. Goals have been an issue, and they’ve managed just one across their previous four Premier League (PL) fixtures, and just six all campaign. Interestingly though, four of those six arrived before the 30th minute.

At the other end of the pitch, the ‘Baggies’ have conceded a total of 16 goals, and no side had conceded more before this gameweek. Perhaps as a result of fatigue kicking in later in the match, it is also worth noting that they have conceded at least one goal after the 60th minute in four of their seven PL matches.

Tottenham’s impressive start to the season (W4, D2, L1) saw them go as high as second for the first time since February 2019 last weekend. They eventually finished the gameweek third, which is coincidentally where they rank in terms of the highest average number of shots on target per game (5.71).

Excluding a bye in the EFL Cup, José Mourinho’s side have won six (L1) of their previous seven competitive matches on the road, scoring 2+ goals in five of those matches. Additionally, they scored 2+ goals in four of their six matches vs newly promoted sides last season and lost only once (W3, D2, L1).

Star striker Harry Kane has been directly involved in 22 goals in all competitions for Spurs this season (12 goals, ten assists).

Hot stat: West Brom have conceded 41 shots on target - the league’s joint-highest such number ahead of this gameweek. 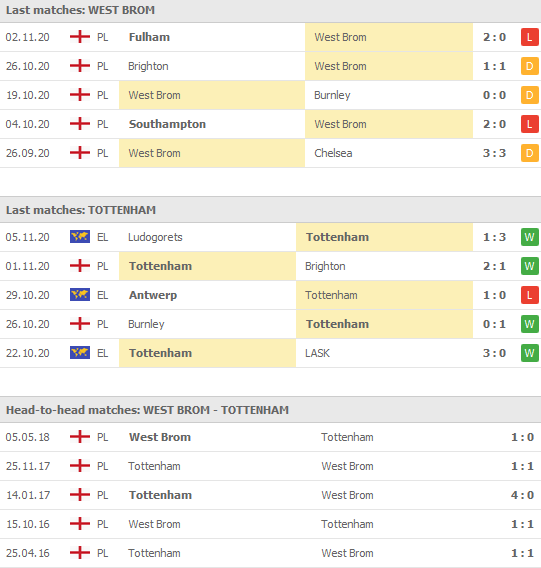