PAOK have drawn both UEFA Europa League (UEL) Group E matches but are favourites to win against a PSV side weakened by absences to key personnel. Unbeaten in their last five competitive games (W2, D3), PAOK therefore have a chance to improve on their W1, L3 record versus PSV, although they’ll have to do it under interim manager Pablo García after former boss Abel Ferreira was pinched by Brazillian footballing giants Palmeiras.

In their eighth UEL group stage and gunning for their fifth progression to the knockouts, PAOK might look to their closing stage prowess to get a win here. Their last three competitive wins saw them score 75% of their goals in the second half, and a whopping four goals from the 88th minute onwards!

PSV, meanwhile, have something to prove in their eighth UEL group stage appearance, having failed to progress in four of the last five attempts. They’ve recently secured back-to-back wins following two defeats (in all competitions), with three of those four matches ending 2-1 to the winner on the day and all four witnessing at least one goal in each half.

The Dutch side navigated two away ties to qualify for this UEL group stage, and have lost just one competitive match on the road this season (W5, D1, L1). Goals have been on offer, with both teams scoring in five of those seven games, contributing to an average of 3.29 goals per fixture.

Players to watch: Thomas Murg has two goals in four matches for PAOK, on both occasions securing a point in a 1-1 draw.

Meanwhile, Donyell Malen scored both PSV’s goals in his last UEL match - PSV have won all five games in which he’s found the net this season.

Hot stat: PAOK have more goalless draws in the UEL proper than any other side (eight), while their total draw count of 19 is second on the all-time list. 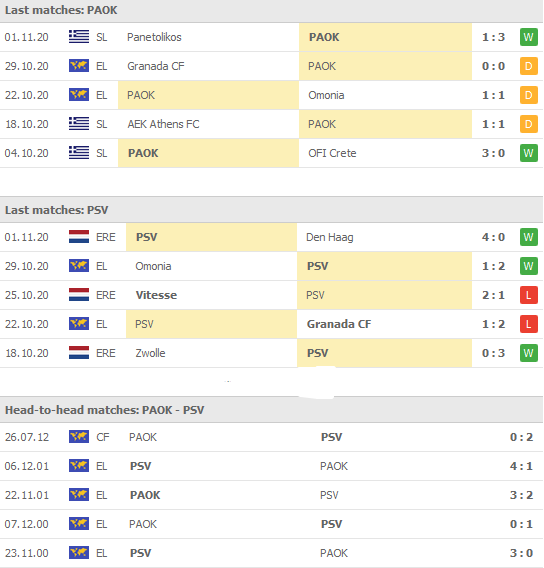