Gabriel Jesus marked his return from injury with a fine finish as Manchester City beat Olympiakos to maintain their 100% record in Champions League Group C.City had taken an early lead through Ferran Torres' cool finish but made hard work of what should have been a straightforward night against the Greek champions.

They needed Jesus, who had not played since 21 September because of a knee injury, to come off the bench and fire home their second with nine minutes remaining, blasting into the roof of the net from a narrow angle.

Another substitute, Joao Cancelo, added gloss to the scoreline when he brilliantly curled home a third before the end.This was the third time City had scored three goals in a European win in the past three weeks and, coupled with Porto's victory over Marseille, means Pep Guardiola's side need only a point in the return in Greece on 25 November to make the knockout stages for an eighth successive season.

That made it the perfect night for City, who welcome Premier League champions Liverpool to Etihad Stadium on Sunday but, in truth, it was a far from convincing performance that got them the points.City had poured forward in the opening minutes and got their reward when Torres exchanged passes with Kevin de Bruyne and coolly slotted home for his fourth goal of the season.

But instead of building on that strong start, City went backwards - firstly by failing to turn their first-half dominance of possession into further chances, and then by playing themselves into trouble.Olympiakos barely made it out of their half before the break but grew in confidence after half-time, and were only let down by poor finishing.

Phil Foden's loose ball to John Stones inside his area should have been punished by an equaliser but Mathieu Valbuena inexplicably sliced wide of a gaping goal.Youssef El-Arabi brought a first save out of Ederson soon afterwards, but Jose Holebas blasted wastefully across goal after dashing into the area down the left.It took Jesus's introduction to settle City's nerves and avoid a tense finish, with Cancelo making absolutely certain of victory from the edge of the area. 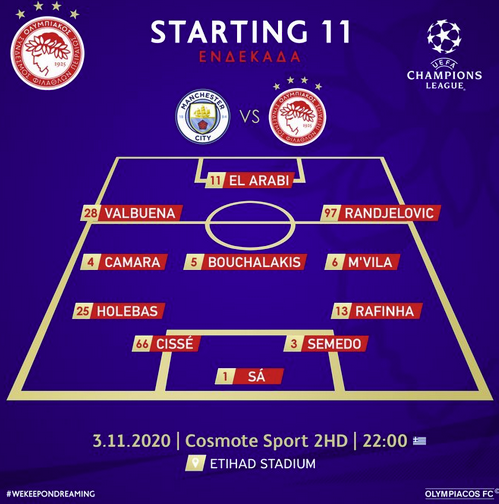 Unbeaten in their last 13 UEFA Champions League (UCL) group stage matches (W10, D3), Manchester City are big favourites against visiting Olympiacos. They’ve scored three goals in both UCL matches so far this season, building on 41 scored goals across their last 15 matches in the competition (2.73 on average).

City’s last 21 matches in this tournament (W15, D3, L3) have averaged 3.76 total goals, while at home, the hosts have won three and lost once this season in all competitions. The ‘Sky Blues’ have netted precisely one goal in all four first halves at home this season, scoring the first goal in three. Overall, they’ve scored the first goal in eight of ten competitive matches this season (W7, D2, L1).

Olympiacos, meanwhile, have started the group stage with a win and a loss, in the expected tight fight behind City in this group. The 2-0 defeat against Porto marked their first competitive defeat this season (W7, D2), and only the second match in which they conceded! As a result, just two of their ten competitive matches this season have featured over 2.5 total goals.

Away from home, Olympiacos have won just one of four competitive matches (D2, L1). Just 1.25 total goals were scored across those, with a 60% majority arriving before the break. Their last four matches against English competition have yielded the same goals average (1.25 per match, 90 minutes only).

Players to watch: Ferran Torres has made an instant UCL impact for City, netting in both his appearances so far.

Ahmed Hassan ‘Koka’ Mahgoub has scored Olympiacos’ last three competitive goals, including one in the UCL, with all coming in the second half.

Hot stat: Olympiacos have conceded 3+ goals in just one of their last 22 competitive away matches.