The result leaves Atletico second in the group on four points from three games, five behind Bayern Munich after they cruised to a 6-2 victory over FC Salzburg. Lokomotiv have two points and Salzburg have one.

A 2-1 defeat at the weekend gave Lokomotiv Moscow a third consecutive loss by that scoreline, and strangely, the previous time they lost three games in a row (December 2019) they also met Atlético Madrid in the fourth, losing 2-0 after conceding in each half. That forms part of a run of four straight losses versus the Spanish outfit that started in March 2018, all of which saw a 2+ goal margin.

However that eventual 2-1 defeat was their seventh consecutive UCL game in which they conceded exactly two goals (D1, L6) - a run that started in the last H2H held here.

Comfortable favourites Atlético saw their 3-1 win over Osasuna at the weekend extend their unbeaten start to the La Liga (LL) campaign (W4, D2), and made them one of just two teams across Europe’s top five divisions to not yet trail in a domestic league game during 2020/21.However they aren’t impenetrable, as shown by the 4-0 defeat at Bayern in their first UCL away game this season - the joint-heaviest European loss in Atlético’s history. In fact that made it four losses from their last five UCL games outside Spain, albeit they’ve never lost versus Russian opposition in Russia in continental competition (W5, D2).

João Félix keeps impressing with a brace in Atlético’s last two matches. He netted the opener in the previous two H2Hs. 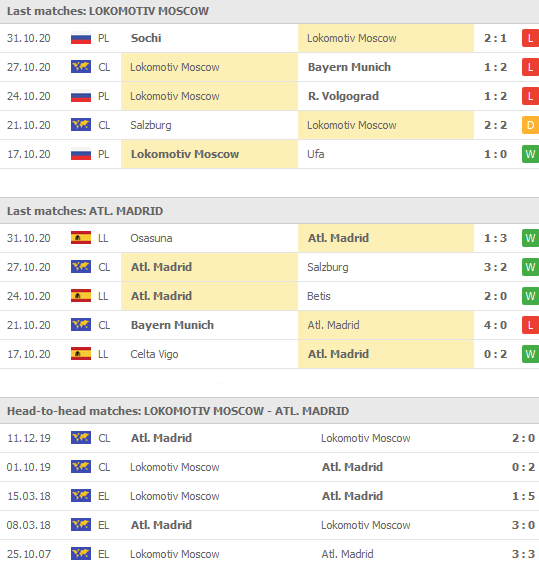