Fulham secured their first Premier League win of the season as they beat West Brom to move out of the bottom three.Bobby Decordova-Reid headed Scott Parker's side ahead from close range after Aleksandar Mitrovic's cushioned header had set him up.

The hosts doubled their lead four minutes later and Mitrovic was again involved as he laid the ball off for Ola Aina, who struck spectacularly from 20 yards out.The Cottagers came close to scoring a third but both Tom Cairney and Decordova-Reid had efforts cleared off the goalline within seconds of each other.West Brom hit the crossbar through Conor Townsend's misjudged cross when it was goalless, but Slaven Bilic's side remain without a league win in 2020-21 and replace Fulham in the relegation

Fulham conceded in both halves last time out for the fourth Premier League (PL) match this season, and have failed to score in half of their six league games to date. Yet, whilst four of their PL matches have seen over 2.5 match goals, Fulham have drawn their last four H2Hs vs West Bromwich Albion, all of which produced under 2.5 match goals.

Losing three straight home league matches herein, Fulham manager Scott Parker has witnessed his side ship two or more goals, and concede within nine minutes in each such game. This has contributed to an average 1.29 conceded goals per match during his time as Fulham manager.

Experiencing their own troubles, West Bromwich Albion (WBA) are also hunting a maiden PL win (D3, L3), and have played out two league draws in as many matchdays. Failing to score in half of their PL games thus far, the ‘Baggies’ have trailed at HT in half of their league matches this season, conceding an average 2.32 goals per-game so far.

Manager Slaven Bilić needs luck here as WBA haven’t won in five PL awaydays (D2, L3) and haven’t won at Fulham in standard time since 1979 (all competitions: D7, L8). Also, the Baggies have failed to score in half of their last six league trips to Craven Cottage (D3, L3), conceding 1.82 average goals in such trips, whilst netting just 0.50 goals per-game in these visits.

Players to watch: Whilst Fulham’s Aleksandar Mitrović hasn’t scored for four PL matches, he has one career H2H goal and has only lost one such encounter (W1, D3).

Karlan Ahearne-Grant scored last time for the Baggies and has one career H2H goal. Both goals in question arrived in the second half. 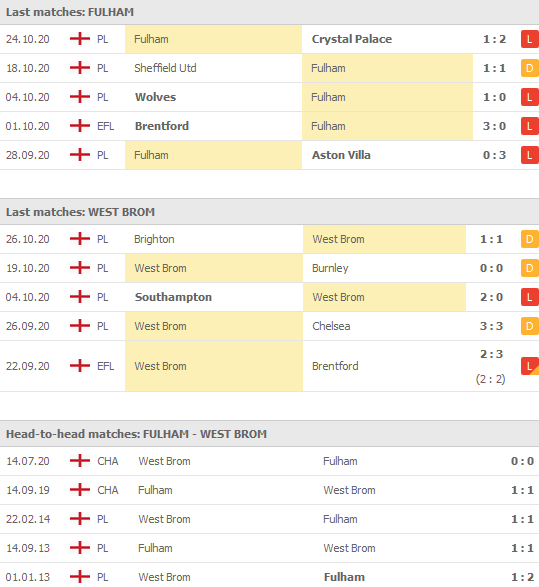