Lionel Messi scored a penalty as Ronald Koeman's era as Barcelona boss began with a comfortable La Liga win over Villarreal.Ansu Fati was the game's outstanding player and scored Barca's first two goals, with a first-time finish from a Jordi Alba ball and then a low drive from Philippe Coutinho's pass.He won the penalty which Messi scored.Barca had the game wrapped up by half-time as Pau Torres turned Messi's cross into his own net.Unai Emery's Villarreal offered little opposition, with their only shot on target coming in the final minute.Messi is the sixth player to score a goal in 17 different La Liga seasons, joining Real Madrid's Sergio Ramos, who joined that club on Saturday.It was Messi's first game since trying to leave his only club in the summer.Messi, 33, submitted a transfer request - claiming he was allowed to leave for free because of a clause in his contract - but Barca said he could not leave for less than 700m euros.He reluctantly announced he would stay because no team would pay that price, and he did not want to take the club to court.He started in the centre but played on the right and left in a flexible front line. 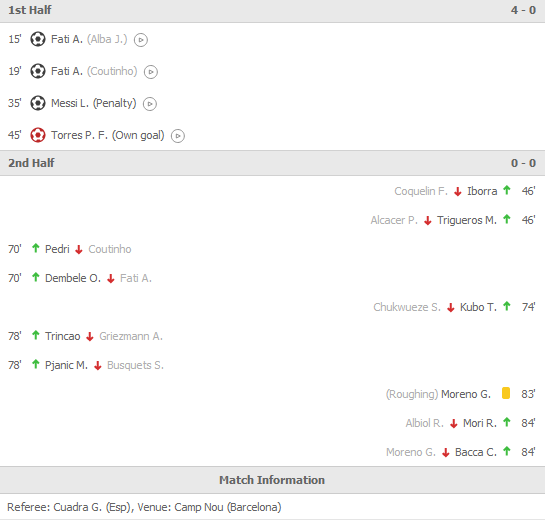